When we bought our two bed bungalow back in 2015 we knew we would outgrow it however we looked beyond the here and now. As two beds went it was quite a large one and the large driveway and big back garden (plus the stunning view with cows) were all something we knew we would struggle to get elsewhere in Whitstable. Property prices are through the roof and we simply couldn’t afford an extra 100k (not many of us can!)

So the plans were made for extending the house at some point and creating not only more living space but extra bedrooms also. One of the first jobs we always knew we would have to tackle was this bad boy.

Which believe it or not was our boiler. When we first viewed the house which had been renovated throughout we just couldn’t understand why they would keep such an ugly fireplace when it had a lovely modern kitchen and bathroom. It was only when we asked some questions that we realised that it was actually a back boiler with electric fire surround (and sexy mood lighting as you can see). We got some quotes and realised that we would likely have to make do with it until such a time as we could afford to get it replaced (around 4K).

Initially I had lots of plans to cheer it up, a bespoke wooden surround for example but this wasn’t possible because of the potential build up of carbon monoxide so I then decided to wall paper it. Realising I didn’t have the patience of a saint I then got creative with washi tape and it became a multicoloured delight (can you sense my sarcasm there?!) I finally painted the surround and the hearth in chalk paint which was the best it had looked in a while!

I did always like using the shelves and the hearth for displaying my stuff, anyone who knows me knows I love a bit of clutter but alas I did find the boiler a bit embarrassing and always felt that it detracted from the other lovely things in the room. When we got the plumber round to talk about our options he told us that it was such a shame that they are so ugly as they are so simple they very rarely go wrong and in fact would continue for another forty years. Our one was in its fifties and still going strong we found out!

We decided to have the boiler and delightful surround pulled off and the wall, the new boiler put into the loft and the hot water tank in the giant airing cupboard in our bedroom removed with new piping installed. We needed this done prior to the extension beginning so we knew where the pipes would be to box in so two weeks ago with a two day slot our plumber arrived.

We could never use this room for anything other than a living space all the while the back boiler was here as you cannot sleep in a room where there is one incase of carbon monoxide poisoning. We have CM alarms but I still wouldn’t take the risk. In the build this room will become two so we needed the boiler gone.

We were left however with a bit of a dilemma. We didn’t want to spend loads of cash on making the fireplace beautiful as it’s likely when the build is done we will want to change it or it will get filthy with dust so we blocked up the open hole with insulation and made a wooden square to go over the top of it. It sounds awful and to be honest looked a bit odd but did somewhat resemble a fireplace. The hearth stayed in place. It occurred to me that we could quite easily paint a surround with limited cost (we have lots of chalk paint) and then give the illusion of having a fireplace without actually having one. 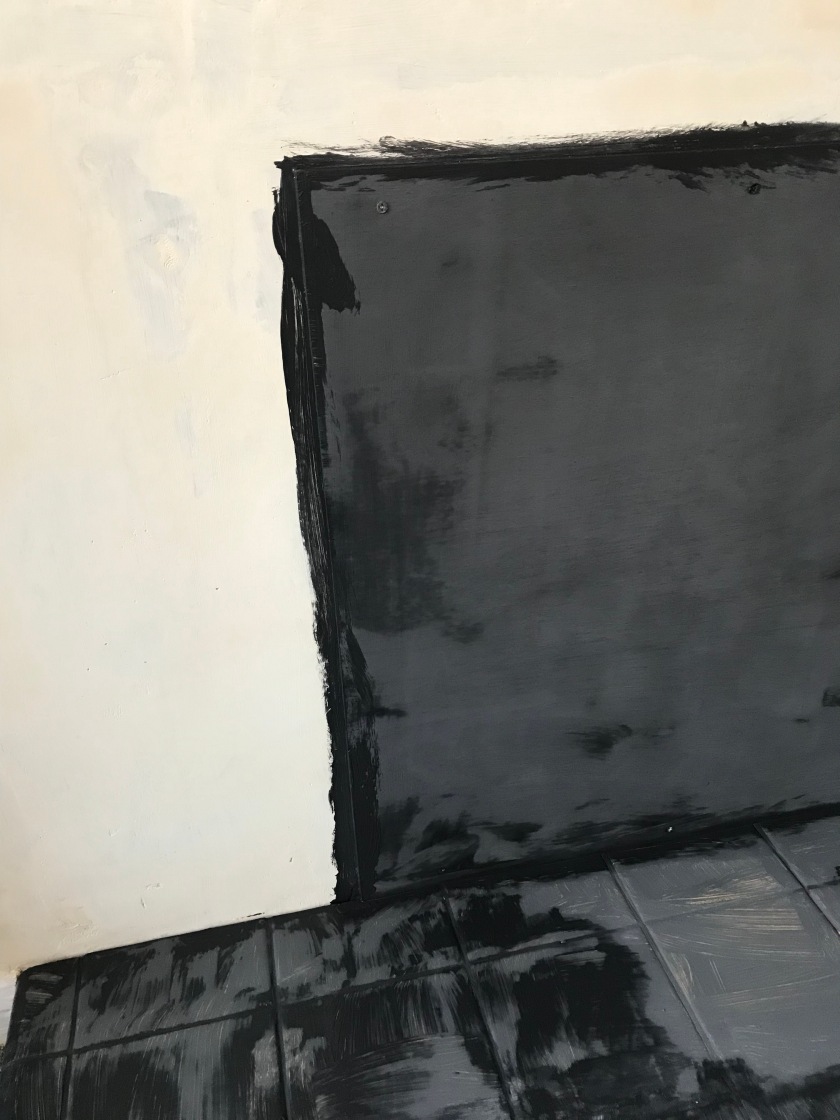 So I painted the wooden panel, the hearth and a surround with chalk paint in ‘charcoal’ that I got from Aldi. I then waxed everything other than the wooden panel so it was a slightly different shade than the surround and hearth. I did manage to get some paint on the carpet but that’s a lot better than I usually manage!

Karl then cut me lots of tiny circles from logs of wood. All in slightly different sizes and ever so irregular. There are some that are shaped a little bit like hearts, different colours and none of them in anyway uniform. I then used wood glue to stick them onto the wooden panel to look like a stack of logs in an open fireplace. 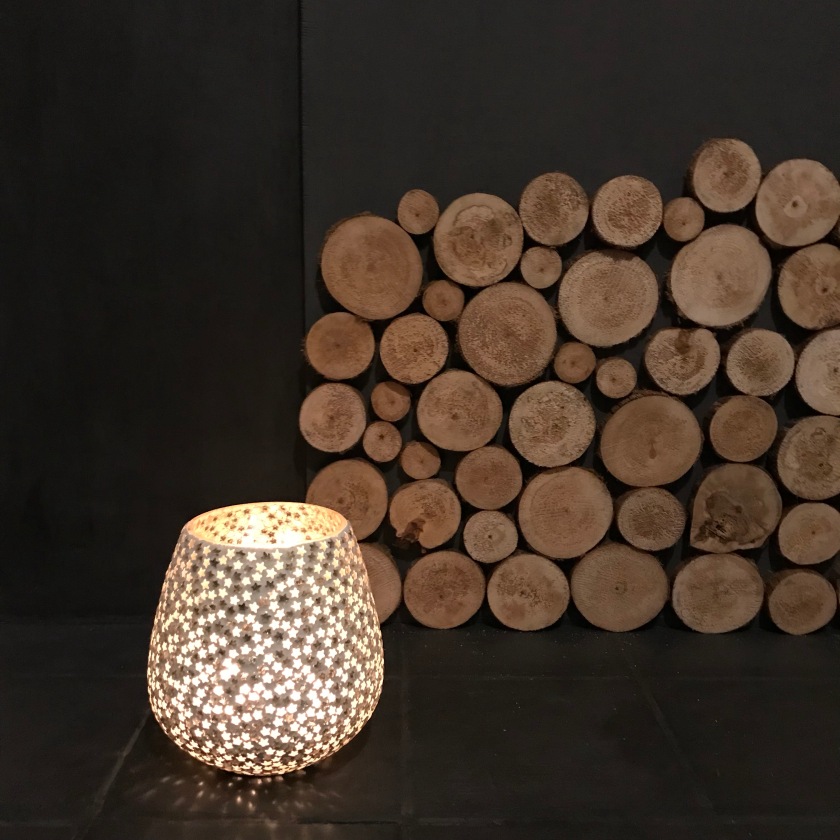 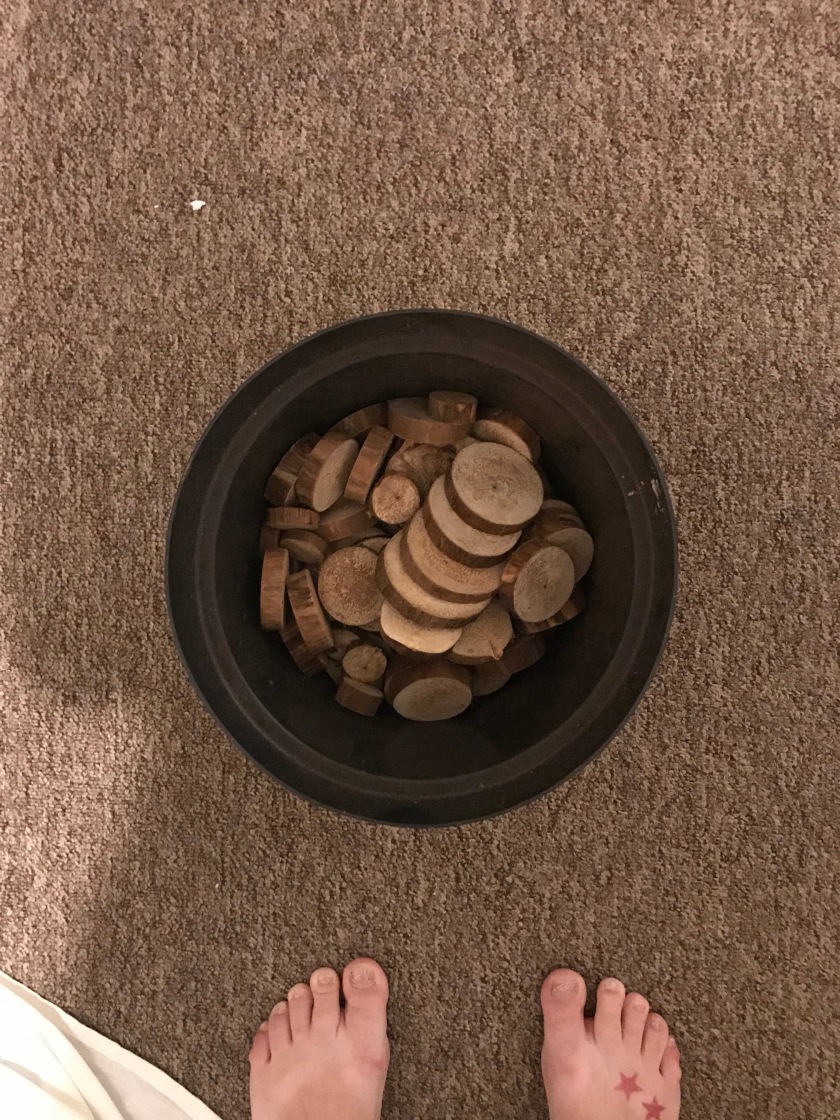 All of this cost £2 for the panel of wood that Karl cut to size, nothing for the logs that were cut down as we already had them in the wood store, £4.99 for some chalk paint and I used Annie Sloan wax that I already had for the waxing afterwards. The wood glue was a tube from B&Q that we already had.

It may not be to everyone’s taste and the Dark is taking me a while to get used to but I absolutely love the results. It looks like it was done by someone far more professional than me and my old paint brush and Karl got to use his big chopper which always excites him massively.

I would love to hear what you think and more importantly cheap ways you have used to upcycle your home.

2 thoughts on “The world’s most vintage fireplace……”

Hello lovely people...... just coming to say hi. I’ve taken some time out. Originally I planned on taking a couple of days but that turned into nearly two months. I had a bit of a MH breakdown and had to take some time. It’s so easy to get caught up in feeling like you have to put yourself out there the whole time and sometimes you need a big pause to refresh and reset. I’m back on antidepressants which at the time seemed like a massive step backwards but now that I am feeling on a more even keel i see it was absolutely the right thing to do. I’ve had some lovely messages from people asking if I’m okay that I’ve not yet replied to because I haven’t had the words. I will. I hope you have been well and are enjoying the sunshine. I’m not really sure what I will be doing with this account (or Instagram in general if I’m honest) going forward but time will tell. Much love, good vibes and a massive hug to whoever needs one. You rock and don’t forget it xxx
Hope you are okay and that you have had a fab weekend. Please remember ‘you are enough, every sunrise, every morning, every day’. Much love xxx
AD-PR Product So excited to be taking part in another fab readalong with the lovely people at @tandemcollectiveuk ❤️ ‘This Too Shall Pass’ by @juliasamuelmbe is described as being ‘Illuminated by the latest social and psychological research, these 18 powerful and deeply intimate stories about everyday people will inform our understanding of our own unique response to change and improve the way we approach challenges at every stage of life.’ I feel like it’s the book for me at the moment at a time when I am finding life a very big challenge. I will be sharing my thoughts over on my stories over the week. I will also tag all my fellow readalong buddies! Hope you are okay. Sending love xxx
Looking forward to seeing the flowers bloom this year. Flowers make me happy. Chocolate makes me happy too but flowers are far better for the waistline. Hope you are having a fab week so far.....